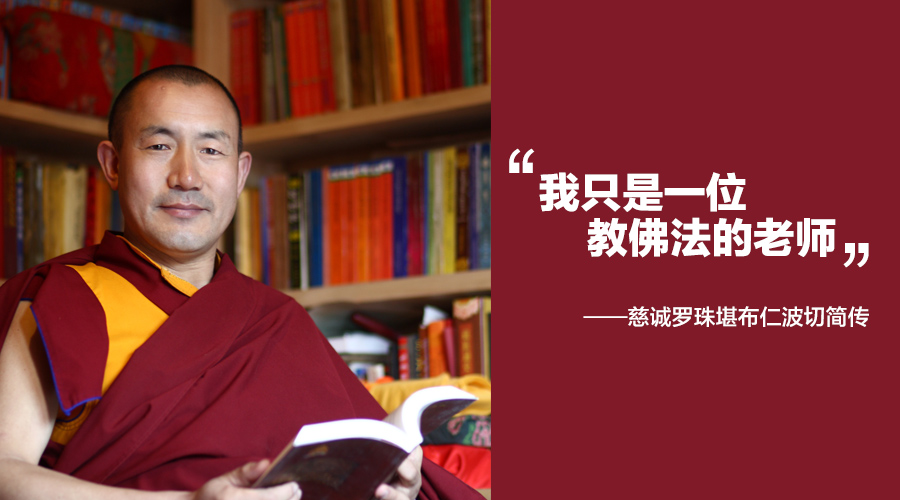 Venerable Khenpo Tsultrim Lodrö is a renowned contemporary Nyingma teacher of Tibetan Buddhism based at Larung Gar (formally known as the Serthar Larung Five Sciences Buddhist Institute), where he serves as a standing Vice Principal. He is a native of Draggo (Ch: Luhuo) County in Sichuan Province. He is an influential public intellectual. 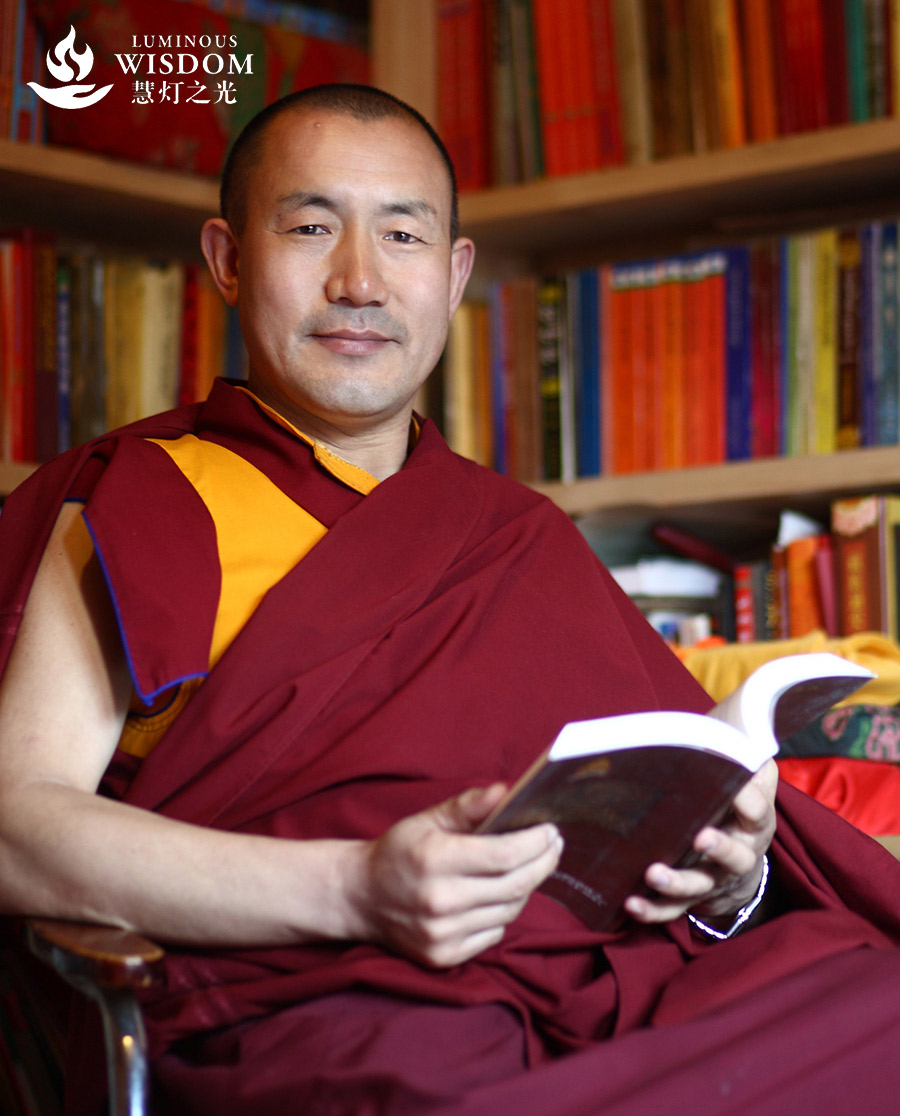 Khenpo was born in an ordinary family in Draggo (Ch: Luhuo) County, Sichuan Province. As a child he attended the local Kasa elementary school and learned to read and write Chinese. He acquired literacy in his native Tibetan entirely through self-study, mastering even challenging classical grammar and poetics through his own efforts. Members of his local community considered him as a gifted child, and teachers and fellow students held him in pride and admiration.

As he grew older, his desire became stronger to become a monastic practitioner and benefit other beings by advancing the Buddhadharma. At the beginning of 1984, Khenpo turned down the position of Committee Secretary in the District Three division of the Luhuo County Government. Thereafter, at 22 years of age, he received ordination at Larung Gar, becoming a disciple of the great contemporary spiritual master, Kyabje Khenchen Jigme Phuntsok. He successively received Pratimoksha, Bodhisattva and Vajrayana vows.

After arriving at the teaching encampment, Khenpo joyfully faced the hardships of his immediate living conditions. Day and night he applied himself diligently to his studies of both the sutric and tantric divisions of the Buddhist scriptures and assimilated all content without difficulty. After years of effort and consecutive levels of strict examinations, he was personally awarded the Khenpo degree by Khenchen Jigme Phuntsok. At the age of 24 he began practicing the highest Nyingma tantric teachings transmitted by Khenchen Jigme Phuntsok. The results of his practice were verified face-to-face three times by his root teacher. 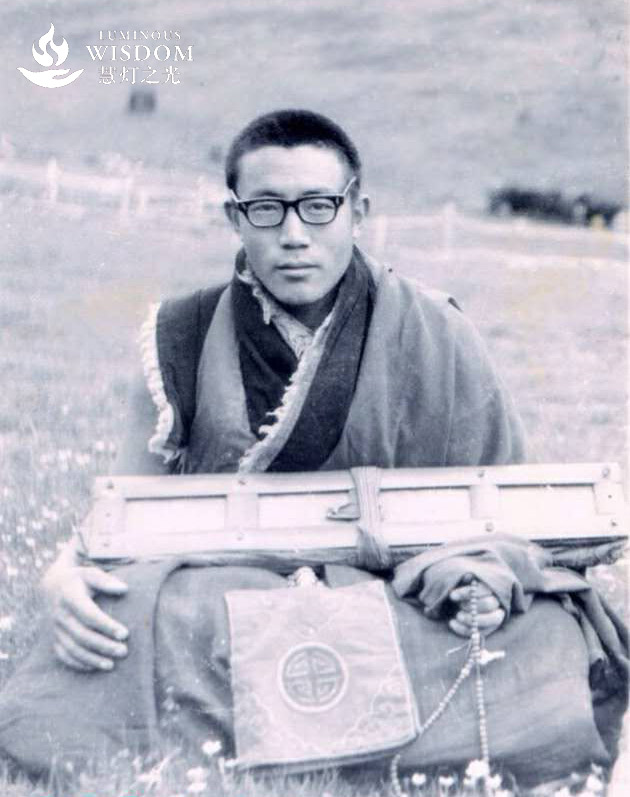 In 1987 Khenchen Jigme Phuntsok led over 10,000 followers on a pilgrimage to the sacred Wutai Mountain in Shanxi Province, creating auspicious conditions for accepting four kinds of Chinese disciples (monks, nuns, male and female lay practitioners). Khenpo Tsultrim Lodrö accompanied his teacher on this trip, serving him by his side. During the daytime Khenpo served as his root teacher’s secretary, translator and cook, and at night time washed his feet and prepared his bed. Seeing to all daily chores from cleaning to cooking meals, Khenpo personally served his master with meticulous attention to every detail. During the six months of pilgrimage, he quietly concentrated on his practice and made constant aspirations and dedications of merit in accordance with ‘The Extraordinary Aspirations of Samantabhadra.’ 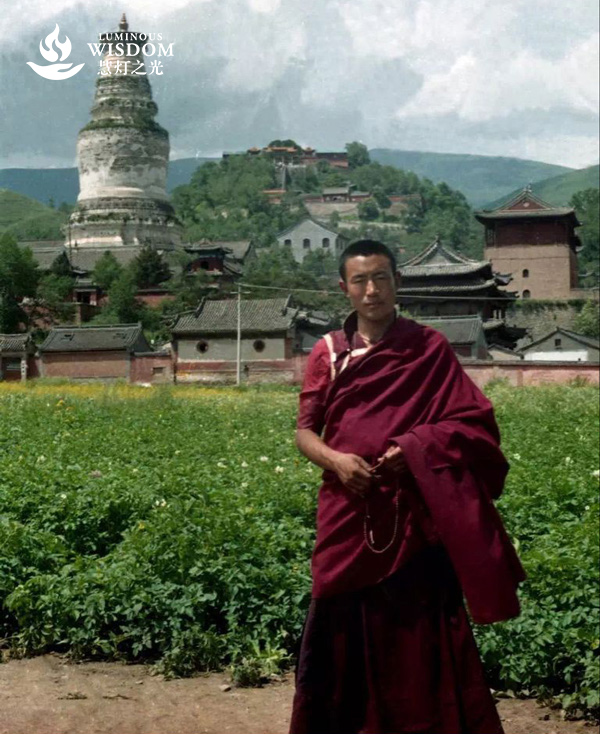 From 1991 to 2013, Khenpo Tsultrim Lodrö held the appointed position of Dean of Education at Larung Gar, a critical leadership role with many responsibilities. Over the course of twenty-one years of service, he gave teachings every day in addition to carrying out his administrative responsibilities. He also trained a large cohort of outstanding monastic students capable of carrying on the lineage and spreading the Buddhadharma. 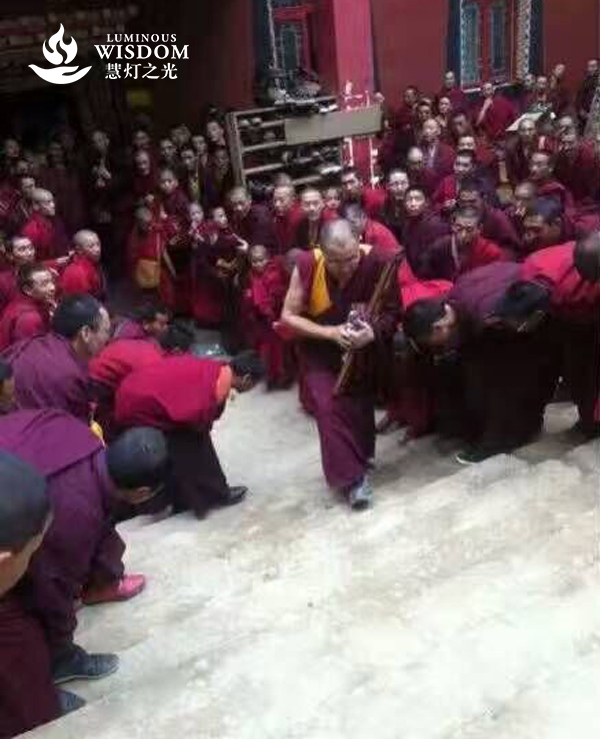 In 1994 Khenpo Tsultrim Lodrö was sent by Khenchen Jigme Phuntsok to Singapore to teach on the Buddhadharma, commencing what would prove to be a long career of Dharma outreach among overseas audiences. 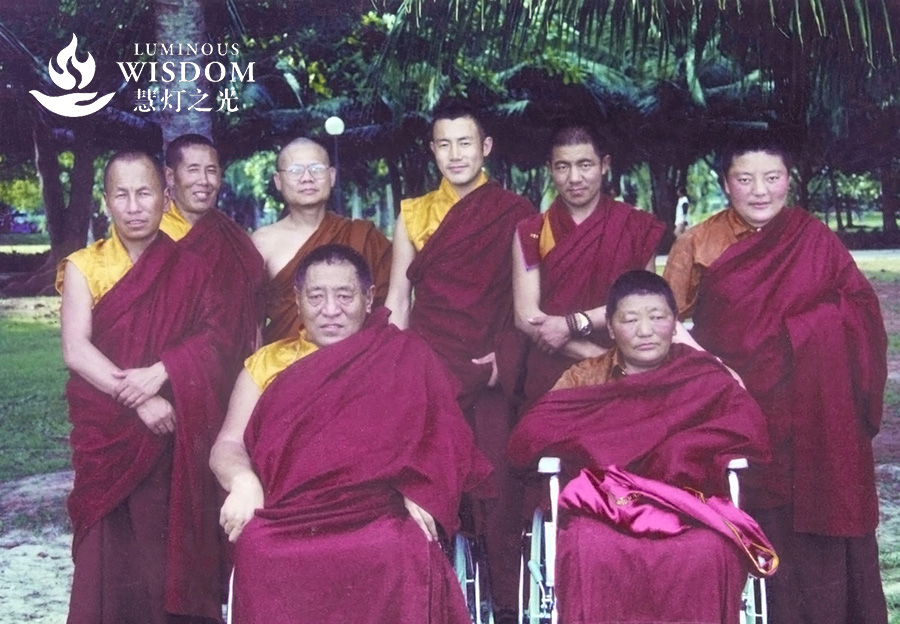 In response to witnessing the severity and cruelty of animal slaughter in inland China, since 1997 Khenpo has set aside time each year to undertake largescale life-release activities. In doing so, he has sought to promote the equality of all living beings, the importance of abstaining from taking lives, and the protection of animals.  Moreover, he has continuously sought to make improvements and adjustments to his method to releasing lives in line with a ‘rigorous, careful attitude’ and ‘scientific technique.’ In the past twenty years, billions of living beings have been saved from slaughter, earning him the respected moniker ‘Life release Khenpo.’ 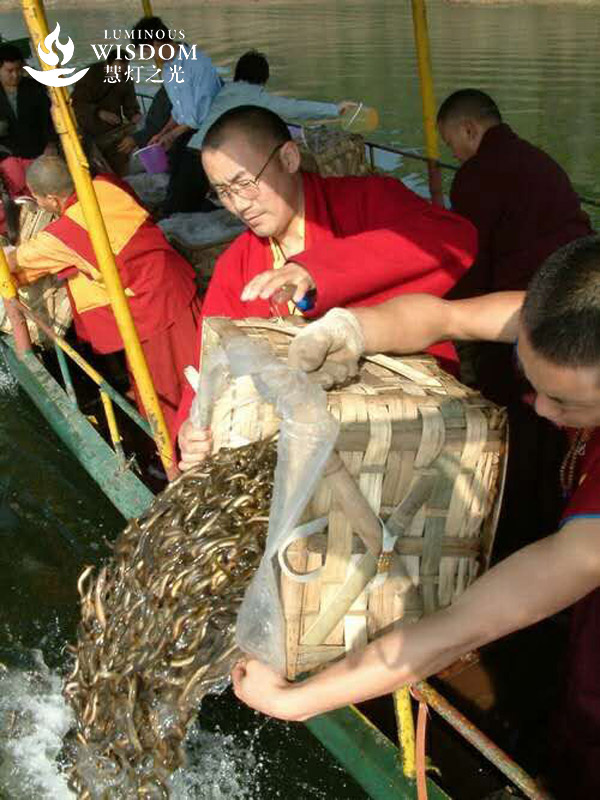 Since 2003, Khenpo has given largescale teachings across many farming and nomadic areas in Tibetan regions. He has taught the fundamentals of correct view and practice in Tibetan Buddhism, and has promoted non-killing, caring for living beings, and vegetarianism. He has also advocated environmental protection and the importance of education and social morality. He has urged members of the monastic sangha not to neglect their responsibility to spread the Buddhist teachings and benefit sentient beings. Furthermore, his call for all monasteries to establish a meditative practice division, an academic division, and an elementary school has had great impact across Tibetan regions. 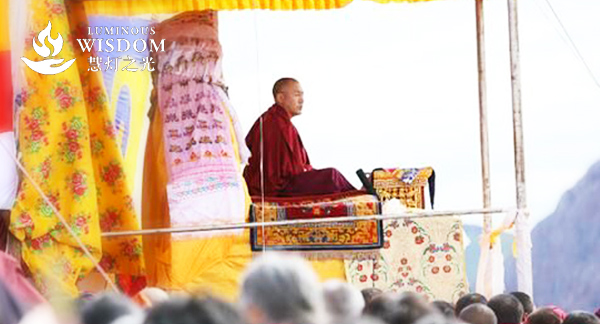 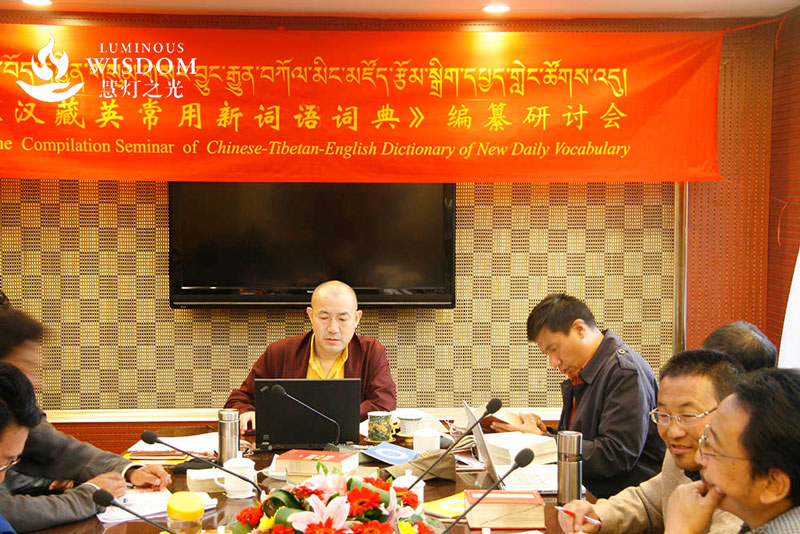 In 2007, Khenpo established the Jiangda Elementary School in a remote valley on the boundary of Serta (Ch:Seda) and Draggo (Ch: Luhuo) counties in the Ganzi Tibetan Autonomous Prefecture. Currently over seven hundred boarding students from remote nomadic and mountainous areas in nearby regions are enrolled in the school. Prior to the school’s establishment, villages in the surrounding area had produced not even a single elementary school graduate. The Jiangda Elementary School has therefore made a vast impact on educational opportunities in the local region. 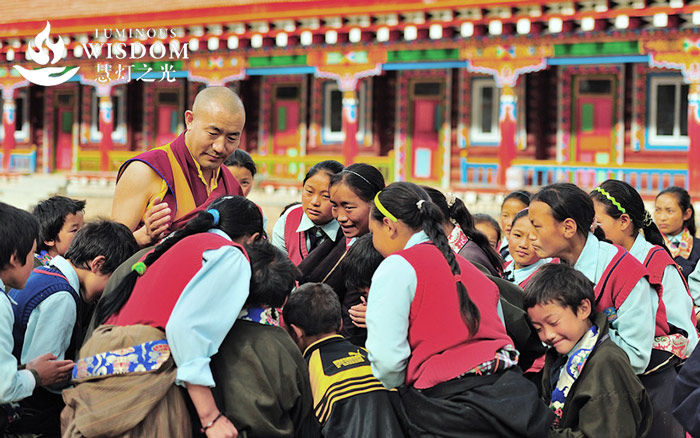 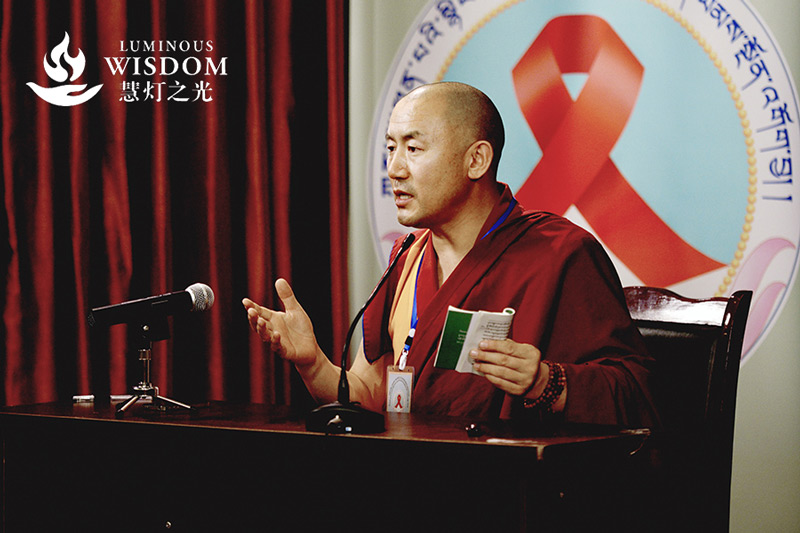 Since 2014, Khenpo resumed his overseas journeys again after a sixteen-year hiatus, and was invited to give lectures in Hong Kong, Taiwan, Japan, Singapore, Malaysia, Indonesia, Canada, the USA, the UK, Australia and New Zealand, etc.

Khenpo was also invited for talks scholarly discussions at prestigious academic institutions such as Harvard, Oxford, Stanford, UC Berkeley, Columbia, Washington University, Virginia University, Toronto University, Auckland University, Sydney University, and Melbourne University, as well as at companies like Google, together with experts and scholars in the fields of science, philosophy and psychology, discussing the mystery of life and the spirit, based on scientific and Buddhist principles. 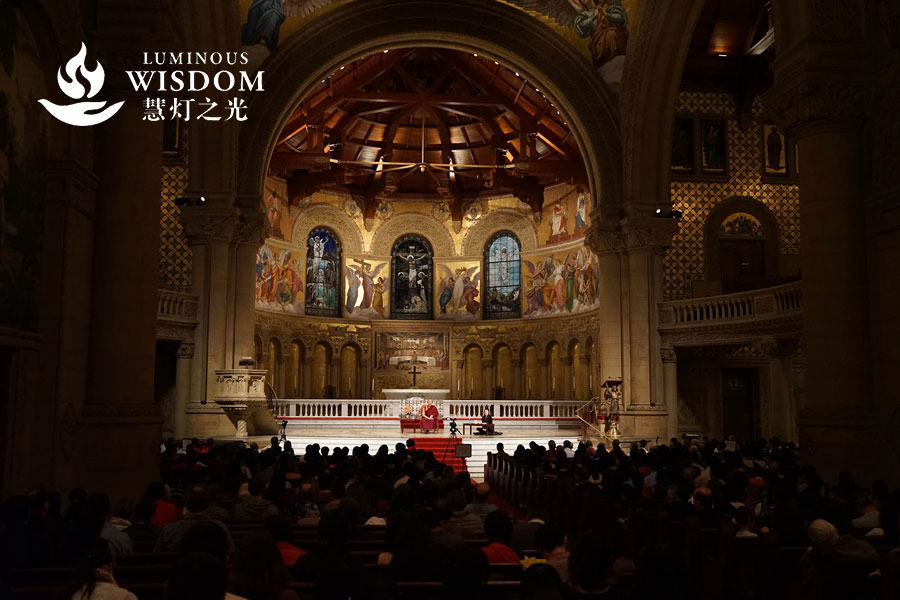 Because Khenpo is very modest and keeps a low profile, always hiding his qualities, the above is just a mere summary of his abundant accomplishments. Hence, a few more points are added here to give some more insight:

Superior Wisdom: Deep Knowledge of both the East and the West

During his studies at Larung Gar, Khenpo received all the precious sutra and tantra teachings from Khenchen Jigme Phuntsok, and his talent in speaking, debate, and written dharma exposition was praised by his lama as preeminent among all the monks and nuns at the institute.

Since 1990 Khenpo has undertaken further research into Western science, philosophy, psychology, and so forth. His room is full of all kinds of books, both historical and contemporary, from China and overseas, covering a broad range of subjects. Many people are deeply impressed with his broad and erudite knowledge of different subjects.

Khenpo’s dharma name, Tsultrim Lodrö, was given to him personally by Khenchen Jigme Phuntsok; this was also the dharma name of the omniscient Venerable Longchenpa. Venerable Longchenpa, Lama Tsongkapa and Sakya Pandita were all reincarnations of the body, speech and mind of Manjushri，and are respectfully regarded as the second Buddha, similar to Guru Rinpoche. This is just the tip of the iceberg in terms of how highly Khenchen Jigme Phuntsok thought of Khenpo and the expectations he had for him. 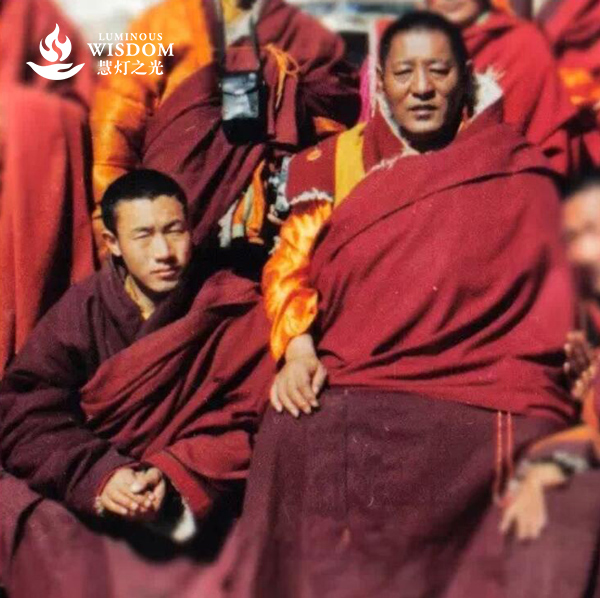 Carrying on his lama’s aspirations and mission, out of the compassionate wish to benefit sentient beings

Khenpo once wrote on Weibo, ”My lama told me that the only meaning and value in our lives is cultivating and sharing love! I will never forget this for my whole life, and hopefully in all my future lives too!”

With such compassionate motivation, Khenpo’s has left his footprints of spreading the Dharma and benefiting sentient beings across all regions of Tibet, mainland China and overseas, in front of audiences that include ordinary people, Buddhist beginners, seasoned practitioners, scholars and experts. 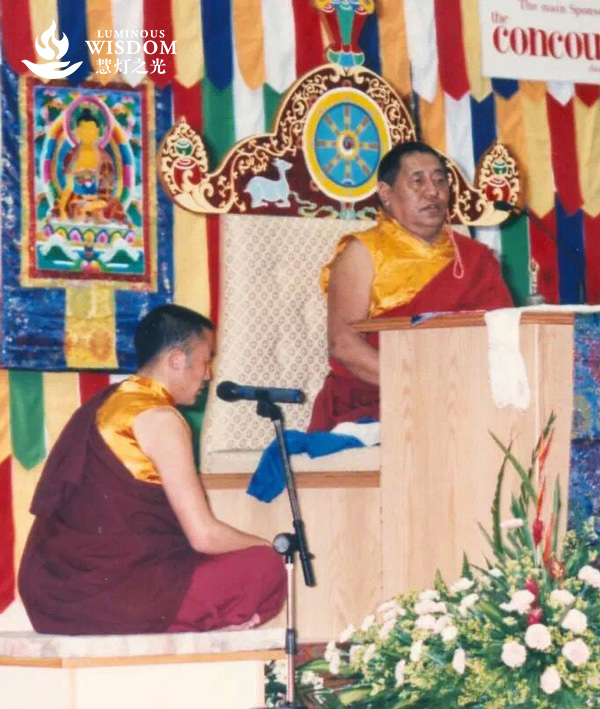 For ordinary people, Khenpo is concerned about their psychological well-being. Focusing on the mental crisis caused by rapid material development at the expense of spiritual life, he has visited university campuses, businesses, and all kinds of other groups. There he has shared Buddhist wisdom, conducting deeper analysis of the cause of spiritual suffering; revealing the relationship between suffering and desire, selfishness and attachment; and guiding people in how to use Mahayana Buddhism and meditation to resolve afflictions and emotional disturbances, and to recognize the truth of life and find genuine happiness.

For those who have faith and want to learn and practice Buddhism, Khenpo has encouraged them to follow the proper sequence of Dharma rigorously: to learn and practice with a down to earth attitude, establish the right view, cultivate renunciation and bodhichitta, realize emptiness, and eventually reach the ultimate goal of Mahayana Buddhism, fully awakening to one’s own innate buddha nature.

The style of Khenpo’s teachings is well structured and organized, easy to understand yet with profound meaning. Khenpo has a unique talent for referring to scientific case studies and examples, and explaining arcane Dharma theories using language and terminology that modern people are familiar with; hence, Khenpo is very popular among intellectuals. Khenpo also places equal emphasis on both theory and practice, always coupling theoretical explanations with corresponding guidance for practice.

Khenpo is also deeply and constantly concerned about the chaotic phenomena of the secularization, commercialization and rigid adherence to forms within Buddhist circles. He has been willing to risk public criticism in order to provide sincere and constructive suggestions in this regard, emphasizing that the authentic practice of Buddhadharma practice is meant to enhance one’s life through learning and training. He has put a great deal of effort into reversing such trends, and bringing the practice of dharma back to the correct way of listening, contemplation, and meditation.

Khenpo diligently applies himself to writing when any spare moment presents itself on his continuous journey to spread the Dharma. Among all of his publications, the Luminous Wisdom series is acclaimed as a Buddhism masterpiece which can stand the test of time. Its contents encompass both theory and practice, with rigorous sequencing, and seamlessly integrate both sutra and tantra. The series is practical and appropriate, and the style of the language is concise, penetrating, incisive, and thorough, meeting the psychological needs of a contemporary readership. As a result, it has become widely accepted and immensely popular. For the broad population of Buddhist students and practitioners, it provides a clear beacon to illuminate the way to liberation. 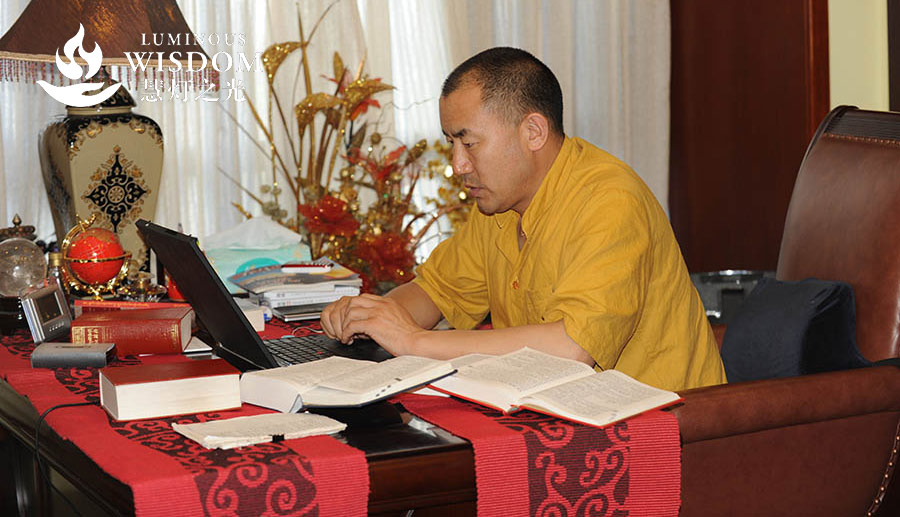 7. “Are You Ready for Happiness? – Don’t Let the Paper Tiger Scare You Off” (Larong Culture Publishing)

2. “Are You Ready for Happiness? – Don’t Let the Paper Tiger Scare You Off” (Larong Culture Publishing) 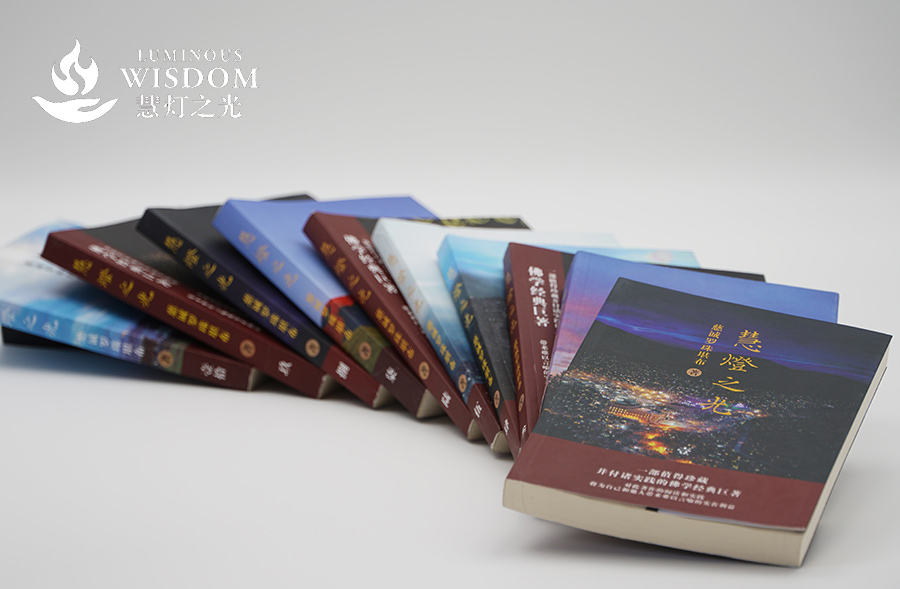 Humble yet rigorous; Seeking truth and being pragmatic

Khenpo’s noble conduct and profound wisdom have won him reverence and admiration from eminent monks and masters of the various Buddhist schools and lineages, as well as from his numerous followers worldwide. He became the spiritual director of the Larung Buddhist Institute and Tibetan regions after the untimely passing of Khenchen Jigme Phuntsok. Yet he keeps a very low profile, and rarely reveals his qualities and level of realization, instead leading a simple, pure and contented life as an ordinary monk.

Some eminent monks and masters have recognized Khenpo as reincarnation of a certain tulku lineage, repeatedly urging him to receive the traditional enthronementceremony, but all have been refused by Khenpo. Not only that, Khenpo inculcated his disciples with the idea that they should rely on the Dharma but not the individual; avoid fascination with supernatural powers and extrasensory ability, and worldly fame and fortune; and keep a simple and pure mind while pursuing their studies. Only this, he insists, can lead to success in Dharma practice. He has been a great role model in this regard, taking on the responsibility himself for spreading the Dharma and benefiting sentient beings, with his words and actions epitomizing the best of Mahayana practitioners. He is a truly qualified teacher who has the courage to raise the lamp of authentic teachings in this era when the Dharma is degenerating almost everywhere.

In the face of such accolades, however, Khenpo simply says, “I am just a teacher of the Buddhadharma.”